Tornados - What every property owner should know 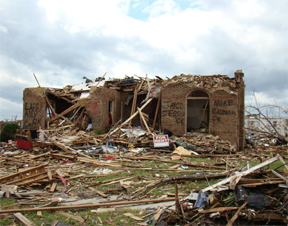 Large hail, strong winds, tornados...they all can wreak havoc not only with our emotions but our property. When we are faced with the volatile weather that occurs in the spring there are a few things to keep in mind.

Despite all the negative press that has us tossing and turning and nibbling at our nails when the sirens start to sound, there is some positive information regarding these natural disasters. The death toll from tornadoes has declined because of better construction methods, safety codes, rescue units and improved medical procedures and practices.

We also have access to storm warnings. For a time, the federal government wanted to ban tornado warnings fearing the populace would panic. Thank heavens, common sense prevailed. Perhaps the only real protection is to stay calm and have an emergency plan. If bad weather strikes, stay tuned to the television or radio for those tornado watch and warning announcements, and if they say to take cover...take cover.

In the meantime, relax and stay calm. You have your friends at Stuckey & Co. who will be on hand to assist you manage with all of your insurance claims, should they arise.

To subscribe to our free online newsletter please register at stuckey.com.